Some might think I am crazy, but I think it is practical!

I make a thick black bean puree and I freeze it into ice cube trays. When you heat it, the beans thicken and then you have "re-fried" beans. I just pop them into the microwave for a few minutes, but you could actually fry them and make re-fried beans. In Guatemala, the re-fried beans are very smooth. There are no chunks. They pressure cook the beans and then puree them and then slowly fry them in a pan until they thicken. 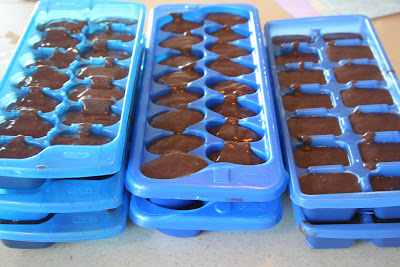 I started doing this for my kids a year and a half ago. To save a few bucks, I decided to make my own baby food for my girls. I started with squash and pears, eventually I got up to making beans. Well, I soon realized that the beans were going really fast, way faster than the other baby food. I later found out that my husband was eating them with his eggs for breakfast. He would scramble an egg or make an omelet and eat it with the black beans and crema.

So it stuck! And I've been doing it ever since. Even though it is consider a soft food, I eat them on a regular basis. Because I am really tight in the mornings, I eat them mainly for breakfast with scramble eggs. I also use them often for quesadillas with chicken and cheese. I put them on top of rice for the kids. 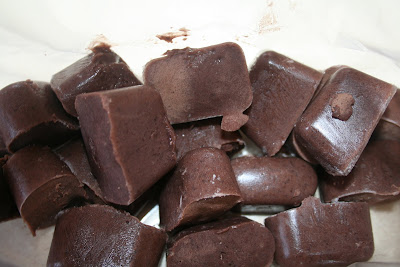 I use about a pound of beans, a really large onion, and garlic salt. I cook them overnight in my slow cooker and in the morning I puree them so they are a little thicker than pancake batter. I pour them into ice cube trays and freeze them for several hours. When completely frozen, I set them out on the counter for a few minutes or run some warm water along the back side of the trays and pop them out. Then I place them into a freezer bag and back into the freezer.

They'll last about a month or so in the freezer.
Posted by Megan at 1:26 AM 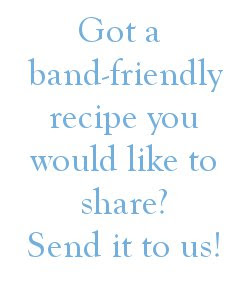 Welcome to Bandfriendlyrecipes.com! Here is a collection of my favorite band-friendly meals. Not only are they great for those who have a gastric band, but they are also family-friendly and sometimes even kid-friendly. Most of all, they are healthy, low calorie, low carb recipes that anyone can enjoy.